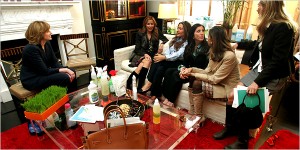 THERE is nothing like the specter of a bathtub ring to mobilize even the most pedigreed homemaker. Sloan Barnett was counting on it when she invited some 40 friends to her five-story Georgian town house on the Upper East Side of Manhattan. She meant to introduce them to her family-owned line of eco-friendly household cleansers, and to persuade them to do their part to save the planet.
Hiroko Masuike for The New York Times 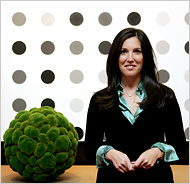 Her guests, familiar fixtures in the party pages of Vogue and Harper’s Bazaar, were improbable grime fighters. They included young society stalwarts like Renée Rockefeller, Valesca Guerrand-Hermès, Melania Trump and Jessica Seinfeld. Given their designer wardrobes, their houses flung about the country, and an aggregate income the size of a small duchy, they were odd candidates for a sales pitch that urged looking beneath the kitchen sink and tossing out your toxic powders and sprays.

And yet, why not? Trend-sensitives as finely attuned to a cause as they are to the charms of Hermès paddock boots, Ms. Barnett’s guests seemed to share her conviction that in this day of fervent eco-consciousness, one can never be too green.

“We all want to make our homes the safest place in the world for our families,” she said to a roomful of women with cascading hair and bouclé jackets. “We get global warming, but we don’t think about what we are exposing ourselves to in our homes. We can all watch ‘An Inconvenient Truth.’ But what can we actually do to make a difference on Earth Day besides buying a Prius?”

The answer, according to Ms. Barnett, is a line of natural health-care and housecleaning products made by Shaklee, a 47-year-old company based in San Francisco whose cleansers were beloved in the 1970s by the first Earth Day generation, the folks who installed composting toilets.

In 2004 Ms. Barnett’s husband and others paid $310 million for Shaklee, which is mostly sold like Tupperware, neighbor-to-neighbor in living rooms. And so Ms. Barnett, the daughter of a man whose fortune from cable television and cellular phones was once estimated by Forbes at $1.5 billion, was pitching laundry boosters, dishwashing liquids, all-purpose cleaners and wipes in a parlor designed by Peter Marino and accented with art by Sol LeWitt, Damien Hirst, and Gilbert and George.

“Moms care more about their children and their families than anything in the world,” she told her guests. “You are the ones who can really make a difference.”

Six or seven years ago, Ms. Barnett and her husband, Roger, were prominent figures on the young New York social scene, serving as hosts of parties for the Whitney Museum and the Winter Antiques Show. But their profile dimmed when they began to have children. They moved to San Francisco about two years ago, although they have held on to their New York town house and to many New York friends.

The turnout last Tuesday was a testament to Ms. Barnett’s powers of persuasion, her cheerleader’s ebullient spirits and evident sincerity. She knew her crowd. She had scheduled the 9:30 a.m. gathering “just after school drop-off,” she said, when the women (or their drivers) had deposited children at nearby private schools. In a display of clan loyalty — and mindful of a photo opportunity, since Ms. Barnett’s lime-bordered invitation advised that The New York Times might cover the event — the women marched into her home (featured last month in Architectural Digest).

They sat decorously in front of their host’s grand piano and drank in her message with their fruit juice and decaf espresso.

Ms. Barnett admitted that her motives are mixed. “I’m doing this because I love my husband,” she said, conceding the plug for his company. Earlier, she had gathered other friends in San Francisco and Atlanta to hear her eco-message. Her co-hosts for Tuesday’s gathering were Julia Koch, wife of the oil and gas billionaire David Koch; and Erica Reid, who is married to the hip-hop mogul L. A. Reid.

Ms. Barnett told the group that her green activism, dormant since college days, stemmed from a renewed commitment to the planet. Her conversion to nontoxic cleaning products was also very personal. It began about three years ago when asthma was diagnosed in her son, Spencer, now 6.

“I found myself at the hospital in I.C.U. with total fear in my heart over this little child,” she said. Before the diagnosis, “we asked a lot of questions,” she recalled, “and we told ourselves if the cause of his illness is not genetic, it has to be environmental.”

When she brought Spencer home, she replaced her conventional store-bought cleansers with alternatives from Shaklee, which her husband had recently acquired. (Earlier, Roger Barnett made his fortune with Arcade, which pioneered the magazine scent strip.) Though medical experts cite no official link between respiratory ailments and supermarket cleansers, Ms. Barnett said her son’s condition improved after she stopped using them.

These days Ms. Barnett, a former assistant district attorney in Manhattan whom Women’s Wear Daily once profiled under the headline “Sloan Ranger,” is today a consumer reporter for KNTV, the NBC television affiliate in San Jose, Calif. She recycles and has tossed away her children’s plastic sippy cups. Concerned with carbon emissions, she is about to replace the Barnetts’ two family cars with hybrids. “I turn the water off when I’m brushing my teeth,” she said. “I’m always learning, I’m always trying to improve.”

Still, she has no plans to reduce the family’s significant carbon footprint by, say, selling the Manhattan second home. “I’m not a perfect person,” she said. “I’m not the greenest woman in America.” And there was scant indication that other guests, most of whom, presumably, knew their way up the steps of a private jet, were contemplating major lifestyle cutbacks. Glancing about the room, Ms. Barnett said, “We aren’t all going to move to one-bedroom apartments.”

She would do what she could, she said, pointing to the correlation between commercial cleaners and the toxic residue that sometimes lurks in the tub, forming that grimy bathtub ring. “Basically your kids are bathing in the Love Canal,” she warned, her comments drawing a shudder.

She poured a quarter-teaspoonful of concentrated Basic H2 all-purpose cleaner into a 16-ounce spray bottle of tap water to demonstrate its use. “People are ready to embrace this,” she said, “but we can’t ask them to make a change unless it comes easily.”

Some listeners took their instruction obligingly, while a few glanced at watches. “I’m feeling so guilty,” said one guest, Jennifer Creel, as she made for the door. She vowed to trade in the suspect detergents at home for eco-sensitive alternatives.

Ms. Seinfeld, who is married to the comedian Jerry Seinfeld, was prepared to clamber on board. “I’m a child of two parents who grew up in the ’60s,” she said. “I’ve been recycling since I was born.” Did she plan to reduce her own carbon footprint by selling off a few of her possessions? “What I have and what I don’t have is not something I talk about,” she said.

In total, Ms. Barnett’s informal consciousness-raising resulted in 65 orders for Shaklee’s $140 Get Clean kits, a showing that might make any one of the company’s 750,000 distributors proud.

Ms. Rockefeller wanted four kits, one as a gift to her housekeeper. “I want to spread the word,” she said.

She plans to practice conservation, to a point. Energy-saving light bulbs are fine — for the utility closet, perhaps. In other rooms, “they don’t give a very pretty light,” she said.

Taking in such reservations, Ms. Barnett remained sanguine. “This is the grass-roots way to help save the world,” she said.

One pointy-toed step at a time.